ANDRE: “You see, I think that people today are so deeply asleep that unless, you know, you’re putting on those sort of superficial plays that just help your audience to sleep more comfortably, it’s very hard to know what to do in the theater. ‘Cause, you see, I think that if you put on serious contemporary plays by writers like yourself, you may only be helping to deaden the audience in a different way.

WALLY: What do you mean?

ANDRE: Well, I mean, Wally: how does it affect an audience to put on one of these plays in which you show that people are totally isolated now, and they can’t reach each other, and their lives are desperate? Or how does it affect them to see a play that shows that our world is full of nothing but shocking sexual events and terror and violence? Does that help to wake up a sleeping audience? See, I don’t think so. Because I think it’s very likely that the picture of the world that you’re showing them in a play like that is exactly the picture of the world they have already. I mean, you know, they know their own lives and relationships are difficult and painful. And if they watch the evening news on television, well, there what they see is a terrifying, chaotic universe full of rapes and murders, and hands cut off by subway cars, and children pushing their parents out of windows! So the play tells them that their impression of the world is correct and that there is absolutely no way out. There’s nothing they can do. And they end up feeling passive and impotent.”

—from My Dinner with Andre

Francois Truffaut is said to have opined, there is no such thing as an anti-war film, because the violence on screen will always be too exciting and attractive.  Today, all things are like that: there’s no such thing as an anti-anything film or book or play, because all critical dramatizations of an activity or trait have the effect of promoting that activity.  Just the fact that an activity is shown on television or in the theater constitutes praise.

For example, I’m sure the creators and writers of The Simpsons believe they are criticizing the ignorance, apathy, and consumerism of the real-life Homer Simpsons, but I think the effect the show has on the people who need to hear such criticism is to convince them that sort of behavior is normal, it’s common, and there are rarely any negative consequences to it.  They may even say, I’m doing all right, since I’m not as bad as that Homer.  If the line for unacceptable behavior is set by Homer, then all those whose behavior is less extreme than his can breathe a sigh of relief.  (And that’s if Homer’s actions fall into the category of unacceptable or maladaptive; in fact, the show generally shows him to be relatively successful, meaning it is really suggesting the line at which ignorance, apathy, and consumerism become actually bad is somewhere beyond the level exhibited by him.)  Surely, however, it’s a comedy, and people aren’t basing their lives on its precepts?  Maybe, but it’s hardly alone in conveying the same basic message, and if everywhere is broadcast the same ideas, where will a person learn another?  Like Marx said, man’s consciousness does not create his being, but, on the contrary, it is his being, especially his social being, that creates his consciousness.  How often have we seen these types of articles: 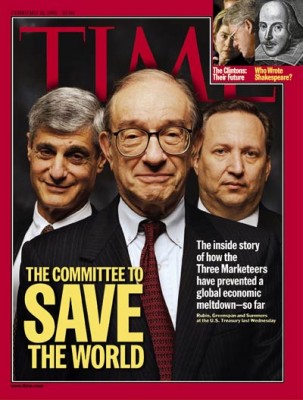 What can be the meta-message of these articles but, the people in charge are good, brilliant, worthy, and most importantly, they know what they’re doing?; they’re definitely a different breed than your idiot former high school classmate who posts those political things on Facebook, and they’re definitely not stumbling around blindly, just hoping to suck out the last few dollars from a listing ship before they can retire and it sinks to the bottom of the ocean.  Maybe all this has “no effect” on people, but a $142 billion advertising industry begs to differ.

Satire is dead.  The satirizable subject no longer exists, because that supposes some exaggeration is possible, when reality has already reached the limits of what can be exaggerated.  A caricatural drawing exaggerates the features of its subject to comic or grotesque effect, but what can the draughtsman do if the subject’s nose is already three feet long?  Do Carl Hiaasen’s novels depicting the venality and corruption that’s apparently ubiquitous in Florida really help awaken people to these things, or do his readers simply accept them as yet more unalterable facts?  No doubt one possible message of Natural Born Killers is that we would be better off without so many violent movies, but it is still itself one of those violent movies we would be better off without.  In a line cut from the My Dinner script, Andre says, the world has become so dark and so cold that even the works that were once outcries against the darkness now only contribute to the darkening.  But what are you saying, that you can’t make a movie criticizing violence?  No, you can, but only if the movie has no violence in it.  If Oliver Stone had made Natural Born Killers identical in every way to the film he delivered, except that it cut out every act of violence—an airline or Saturday morning edit—then he could legitimately claim to have made an anti-violence or anti-media-violence movie instead what he actually did, which was to overtly and ineffectively criticize media violence while not-so-subtly promoting and profiting from it.  You can make a film criticizing stupidity, ignorance, selfishness, apathy, and materialism, as long as the characters are all smart, well-informed, altruistic, engaged, and don’t derive their well-being from their possessions.

The people whom an artist would seek to change, he can’t show them the way they really are, because that only normalizes their behavior.  And he can’t exaggerate their behavior, first because it’s rarely possible to do so, and second because that would only further excuse those whose behavior falls short of the exaggeration.  Instead, the only way an artist can try to effect change is to depict the changed world, and if it can’t be done through that means then it can’t be done at all.