In 2015 George Saunders wrote some recollections of his early years in an MFA program and subsequent experiences trying to write.  He describes how after he was admitted to the program he abandoned his early type of stories and focused on writing boring, mediocre, realistic stories that were “Hemingway imitations.”  These had little success.  Then, after some years of that, in September 1990 he left the Hemingway mode and wrote a story that he felt was actually good.  The next entry of the essay is dated 1996, when his first book is published.  He invites the reader to contemplate the fact that six years elapsed between these entries.  What happened in those six years he doesn’t regard as important enough to include in these memoirs.  I guess the implication is he toiled without success or encouragement those six years, being being finally rewarded in 1996.  But what did happen?  Well, in the About the Author at the bottom of the page we read that Saunders’s first story appeared in the New Yorker in 1992.  In fact it appeared in the October 5 issue, very close to precisely two years after the writing of the “breakthrough” story.  That means it was probably accepted, say, six months before that, or 18 months after the “breakthrough.”  Suddenly six years has been reduced to two, and the persistence looks a lot less impressive.

Maybe Saunders just forgot to mention the New Yorker story.  Maybe the Saunders of 2015 doesn’t feel the publication of that story in the New Yorker was significant enough to mention.  But what did the Saunders of 1992 feel?  He didn’t publish any other stories in the New Yorker prior to some that appeared connected to the publication of that 1996 book, but where else did his stories appear in those six years?  What else happened during those six years in which, according to the Saunders of 2015, nothing happened?  They were likely filled with events that the Saunders of today considers unimportant, but at the time he probably considered them very important.  But in 2015 he writes it so as to exaggerate the suffering, the rejection.  He writes it so as to elide the very substantial encouragement, including monetary rewards, he received during that six year period.  He prefers to present himself as struggling against rejection and lack of encouragement, and no doubt it really did feel that way, but in fact he was receiving much more reinforcement than others, providing him with good reasons to continue, as others without that reinforcement had good reasons to quit. 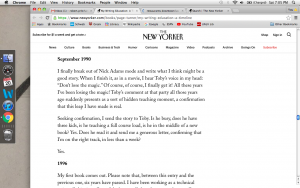 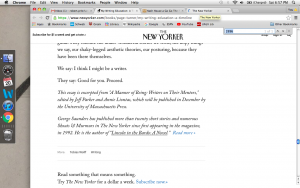 Posted under How the World Works,Non-Fiction,Writing
Comments (0)