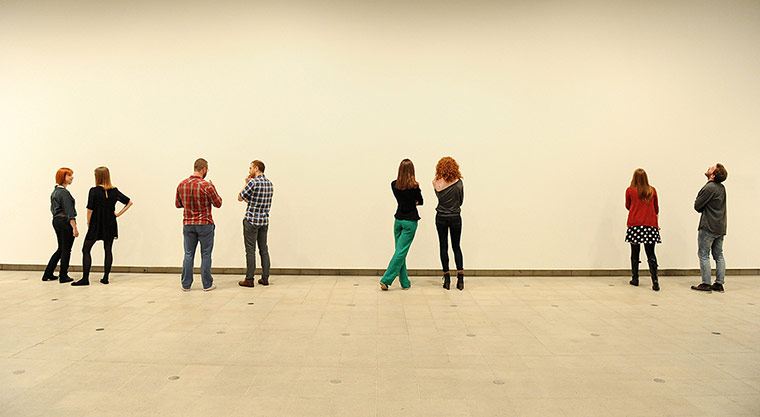 Today, I can confidently state that I am the greatest conceptual art thief in the world.  I have perpetrated dozens of elaborate heists, stealing many of the most valuable works of 20th century art, and not only have I never been caught, but nobody has ever even found out my crimes had ever taken place.  Yes, even the museums that I have stolen from are unaware their precious conceptual artworks have been snatched away right under their noses.

Lesser thieves may have stolen the Mona Lisa or The Scream or what have you.  But while they may have stolen wooden panels or canvases daubed with oil paints, I had bigger game in mind.  Yes, I am an aesthete; I love beauty, and what could be more beautiful than an idea or set of instructions for creating some kind of object or experience?

I entered a life of crime gradually.  One day, while perusing a book in a library, my eye fell upon Sol Lewitt’s “Wall Drawing #122,” a series of instructions to be carried out by anyone, directing him to draw, on a white wall with a regular pencil,  “all combinations of two lines crossing, placed at random, using arcs from corners and sides, straight, not straight and broken lines.”  I looked about the room; everything was quiet.  And then, with my heart in my throat, I photocopied the page.  To his dying day, Sol Lewitt never knew I had stolen one of his most innovative masterpieces.

It might have been an isolated incident, except that as I happened to be walking through New York, I saw, a huge light-bulb sign lit up with the phrase, “PROTECT ME FROM WHAT I WANT.”  This was, of course, a very expensive artwork by Jenny Holzer.  Its owner never had a prayer as I slipped it into my pocket.

My appetite whetted, I was on the prowl for more prey.  When I learned how, in 1962, Yves Klein sold his “pictorial sensitivity” in exchange for gold leaf, I knew I had to have it.  With an elaborate deception, I spirited the late artist’s pictorial sensitivity away from its former owner’s palatial Parisian estate.

Next I stole Vito Acconci’s “Following Piece,” which was the act of the artist in following random members of the public until they went into a private place.  He documented the piece with photographs, but what are photographs?  Mere commodities!  I wanted the art itself, and soon I took it from him, so cleverly he never even knew it was missing.

I became greedy, reckless.  When I learned that Piero Manzoni had placed a metal cube on the ground with an upside-down inscription declaring the cube to be the “base of the world,” allowing him to exhibit the entire planet as an artwork, I know I had to steal it.  Needless to say, since Manzoni’s plinth was not the actual artwork, it wasn’t necessary to travel to Denmark, where his plinth was located.  Instead, I placed my own plinth upside down on the ground near my house, instantly expropriating the planet Earth from Manzoni and placing it safely in my collection.

If you were to visit my home, you would be amazed by what you would see there.  In one room I have Robert Barry’s “Telepathic Piece,” which was created when, in 1969, he tried “to communicate telepathically a work of art, the nature of which is a series of thoughts that are not applicable to language or image.”  Sotheby’s estimates its value at $5.5 million—if only they knew where it was!  In another room is Martin Creed’s 2001 Turner Prize-winning work “The Lights Going On and Off,” an empty room in which the lights keep going on and off.  Most people believe this work is still in the Tate Modern, but that one is a copy I left behind when I stole the original.

Alas, some of the greatest prizes have eluded me.  I longed to steal Robert Rauschenberg’s “Portrait of Iris Clert,” which is a telegram he sent with the words, “This is a portrait of Iris Clert if I say so,” but there are no more telegrams.  For years I plotted to steal “The Void,” a collection of nonexistent paintings by Yves Klein, but the paintings’ current owner, a Greek shipping tycoon, has proven too wily to be taken in by my subterfuges.

Indeed, so many works are missing that if you’ve visited a museum of contemporary art in the last two or three decades, you’ve probably been defrauded.