How Much Persistence is Needed? 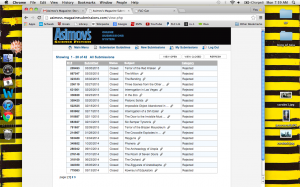 Answer: a little bit more than you showed.

To expand: for successful writers, the amount of persistence they needed is always the exact amount they demonstrated (while conveniently ignoring the conditions that caused them to act those ways); the possibility of a post hoc ergo propter hoc is not considered.  For unsuccessful writers, the amount is persistence needed is always just more than the amount they demonstrated.  By this mechanism the hypothesis of talent + persistence = success is rendered immune to falsification, as any amount of persistence resulting in failure was ipso facto not persistent enough.  If you persisted for five years, ten were needed.  If you persisted for ten years, twenty would’ve been sure to do the trick.  “You’da broken though if you’da just hung in there a little while longer, kid!”  Thus is the facade maintained.

One can see why the proponents of the formula talent + persistence = success like it so much because it hides the difficulties that become apparent when one unpacks its terms.  E.g., one might ask, what causes a person to persist?

If one believes in the free will hypothesis, these objections are easily dismissed.  A “free” individual is, by definition, not influenced by his past or present environments.  He can persist even in the face of literally infinitely discouraging factors** and his persistence comes from himself alone.  He simply *decides* to persist, and can come to whatever decision he likes without reference to his past or present experiences.  The believer in the free will hypothesis is at liberty to say the individual who gives up “should” have persisted or who persisted “should” have given up, but those who reject that hypothesis must admit that these “shoulds” are meaningless, and that the people who persist have good reasons to persist and who give up have good reasons to give up, and the presence of the reasons is known from the behavior.  It could be reasons which seem convincing to one fail to convince others, but those others haven’t had the experiences of the one.  For the persistent to become indolent or vice versa, environmental conditions must change or have been different.  One demonstrates precisely as much persistence as one’s environmental conditions have induced, and therefore to say that if a writer would only be more persistent he would become successful is as nonsensical, and contrary to fact, as to say that if a quadriplegic would only leap from his bed and turn somersaults he could be cured.

Here are time-to-response numbers in chronological order, measured in days:

(N.B. These are “absolute” days, not working days, but Asimov’s doesn’t send responses on weekends.  When RT’s were over 40 the effect was negligible, but the very low RT numbers subsequent to February 7, 2015, require one takes it into account.  E.g., anything submitted on a Friday will have a minimum RT of 3 regardless of how little time was spent on it at the Asimov’s offices.  Therefore the average RT of 2.3 after Feb. 7, 2015, is likely to be upwardly distorted.  If one adjusts the numbers on the principle that a story submitted on Friday and rejected on Monday, i.e., on the next working day, has a RT of 1, the average is reduced to 1.7 days per story.)

For a good time, ask me how many of these were personal rejections.

*”Don’t quit your day job,” “You sold a story? Does that mean I can retire now?,” etc.  vs. more supportive behaviors.

**That “free” individuals of this kind have never been known or seen on this Earth isn’t the subject of the present essay.

***The accidental double submission of this story has been elided.